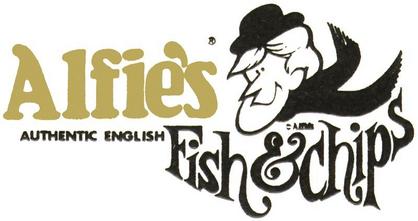 Since 1969, Alfie’s Fish and Chips has been serving up the most authentic English fish and chips, seafood and British treats to locals and tourists from all over the world, right in the heart of the Central Coast… Lompoc! We pride ourselves on our quality, friendliness, and making your family happy (and full!) time after time.

Alfie’s started in 1969 as a franchise. Opening hundreds of stores in the first few years was too much, too fast. The Alfie’s corporation went bankrupt in 1972. The first Alfie’s in Texas City, Texas (near Galveston) closed in 2019, making the Lompoc location the very last Alfie’s. In November 2019, One month before our 50th anniversary, Alfie’s moved to our current location.

Opened in 1969 by the Scottish couple Jack & Margaret Cairney, they passed it on to their daughter Colleen Staffel. In 2001, Colleen sold the business to Mike and Nellie Sewall. They have been successful at keeping the quaint English feel and family atmosphere. They even kept all the original recipes while adding many of their own.

Alfie’s packed up and moved down the street to 610 North “H” Street, formerly known as Scratch Kitchen (or the old Don Pepe's for those with longer memories!) in 2019. Mike, Nellie, their four children and three grandchildren hope you have nothing but great experiences here at Alfie’s. Enjoy!

Dine in, take away or have it delivered through Doordash.com!